are cosmic engines driving the evolution of their entire host galaxies.

predictions serve as main ingredient for numerous other astrophysical disciplines.

strongly impacts the evolution of all components of a multiple system.

are direct probes of the outcome and the physics of binary interactions.

I have vast experience working with high-resolution spectra as well as with integral-field spectroscopy. This was one of the reasons why I chose to work on SoXS, a new state-of-the-art spectrograph for the ESO-NTT, as my ESO duty work.

Over the last years, I was awarded the equivalent of over 5 nights as PI with the ESO VLT. This includes 3 nights with VLT/MUSE to study young open clusters in the Large Magellanic Cloud, and a monitoring program with VLTI/GRAVITY to study a Be binary system. To carry out a large-scale spectroscopic survey of massive Be stars, I have collected more than 75 nights of observations with the Mercator telescope. I was further involved in several successful VLT and HST proposals as a Co-I.

Is HR 6819 a triple system containing a black hole?

Investigating the lack of main-sequence companions to massive Be stars

Investigating the possible binary origin of Be stars

About 20% of the massive galactic B stars are classical Be stars, observationally classified as such because their B-star spectrum is dominated by strong emission lines. While it has been shown that the formation of a circumstellar decretion disk, in which the emission originates, is linked to fast rotation of the central star, the origin of the rapid rotation remains unclear.

Different channels for the origin of the Be phenomenon have been proposed. One of them is based on binarity, proposing that Be stars are the mass gainers in post-mass-transfer binary systems. Apart from gaining mass, the stars also gained angular momentum, spinning them up to almost critical rotation rates. If the binary channel is the dominating one in the formation of massive Be stars, two clear and testable predictions emerge:

In a literature study of a sample of ~300 massive Be stars (with spectral types B1.5 and earlier) in the Milky Way, we found that there is a clear lack of reported Be stars in binary systems with close main-sequence companions. While the sample is inhomogeneous, this gives a first hint that the binary channel might be dominating in the formation of massive Be stars.

Hunting for post-interaction systems in the SMC cluster NGC 330

When the integral field spectrograph MUSE mounted at UT4 of the VLT, Chile was equipped with a state-of-the-art adaptive optics module in summer 2017, it was possible for the first time to resolve the dense core of open stellar clusters in our neighboring galaxies, the Magellanic Clouds, and obtain spectra for its entire massive star population.

Using MUSE spectroscopy for NGC 330, a young, massive cluster in the Small Magellanic Cloud (SMC), we are able to provide a spectroscopic consensus of the massive star content of NGC 330. 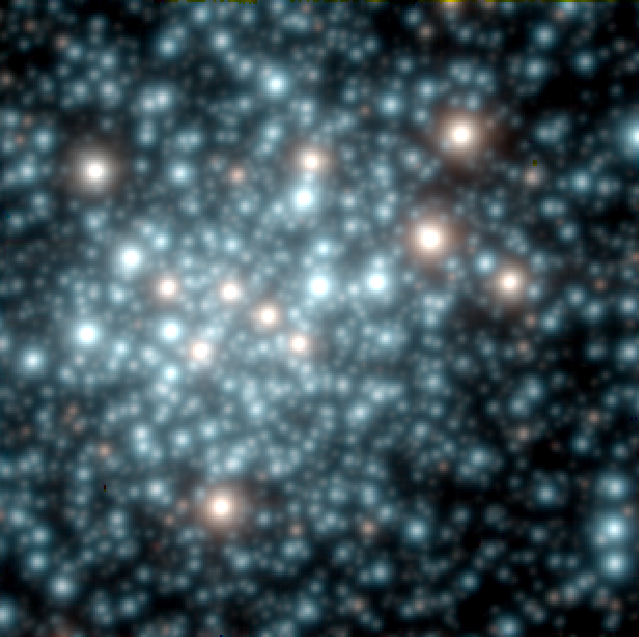 We confirm that there is a surprisingly large number of classical Be stars, that is rapidly rotating stars that display characteristics Balmer emission lines arising in a circumstellar decretion disk. Based on their position in the color-magnitude diagram, they are prime candidates for binary interaction products. Using the multi-epoch nature of the MUSE observations, we identify binary systems in the cluster. We find that the current binary fraction in NGC 330 is significantly lower than in young stellar cluster.

The RGB image shown here is constructed from the MUSE observations of NGC 330.